PLEASE SEND SOMEONE ELSE 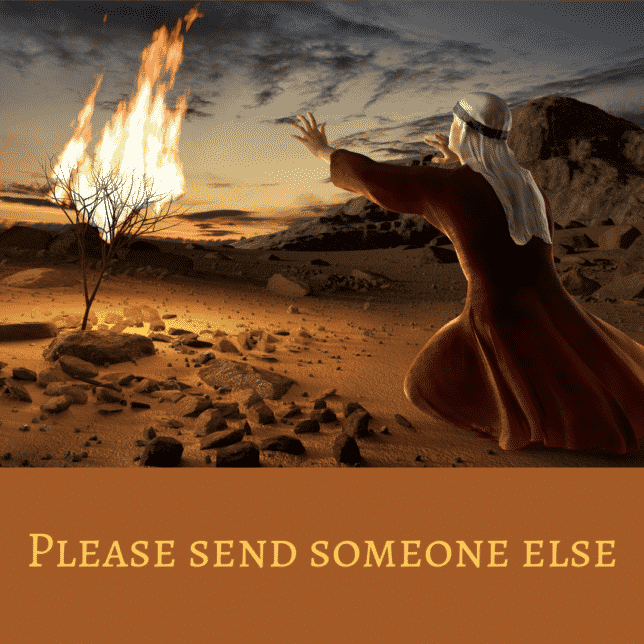 Can you imagine how it would feel to have one of your greatest weaknesses want to be used by the Lord? This morning I was reading my devotional on Moses and how he was used by the Lord to free the people of Israel. The entire life of Moses is fascinating from his birth to his death. He was not the type man that you would have thought that the Lord would choose to lead His people, but the Lord wanted him for a reason.

When the Lord appeared before Moses in the burning bush, Moses said some of the same things that I could imagine myself saying. The Lord had just told Moses to go to Pharoah and ask him to let the Israelites go.

11 But Moses said to God, “Who am I that I should go to Pharaoh and bring the Israelites out of Egypt?”

Moses was afraid, and I am sure that all he could think about is how many weaknesses he had. He tried many excuses, but the Lord kept pressing that Moses was the one that He had chosen. Finally, Moses plead with the Lord one last time;

10 Moses said to the Lord, “Pardon your servant, Lord. I have never been eloquent, neither in the past nor since you have spoken to your servant. I am slow of speech and tongue.”

11 The Lord said to him, “Who gave human beings their mouths? Who makes them deaf or mute? Who gives them sight or makes them blind? Is it not I, the Lord?12 Now go; I will help you speak and will teach you what to say.”

13 But Moses said, “Pardon your servant, Lord. Please send someone else.”

I feel for Moses in these few sentences. I am also slow of speech and tongue, so, I can relate to his terror. Even though the Lord’s anger burned against Moses, he still used him to do the will of the Lord. Moses acted like he didn’t have faith in the Lord. Moses acted like he didn’t believe the Lord would do what He had said. Even though Moses doubted and questioned the Lord, He didn’t rebuke him and instead, He put the words in Moses’ mouth so that the message could be delivered.

How many times have you pleaded, “please send someone else?” How many times have you thought that there were other people way smarter or more talented than you? I am not a Bible scholar, and I am not an eloquent writer, but I feel compelled to share my struggles and thoughts for the world to see. Is the Lord using me to do His work? The truth is that I don’t know, but I can hope that He is with me. The one thing that we can take solace in is knowing that the Lord picked everyday ordinary people and used them for His will. I am pretty sure that means people like me and you.

Have a Blessed Sunday!

Become One Of The GURLS

HOW TO LOOK ELEGANT WHEN WEARING JEANS

YOU ARE CAPABLE OF DOING SO MUCH MORE