This morning, my morning Bible verses in my daily devotional journal were from Matthew. This is a passage that I have read several times, and I have heard many sermons preached on these verses. But, for some reason, this morning I had a different takeaway and I wanted to share it with all of you. This morning it was the temptation issue that jumped out at me.
The verses are from when Jesus was in the Garden of Gethsemane with his disciples.

39 Going a little farther, he fell with his face to the ground and prayed, “My Father, if it is possible, may this cup be taken from me. Yet not as I will, but as you will.” 40 Then he returned to his disciples and found them sleeping. “Couldn’t you men keep watch with me for one hour?” he asked Peter. 41 “Watch and pray so that you will not fall into temptation. The spirit is willing, but the flesh is weak.”

The things that I normally focused on, were that Jesus fell face down on the ground to pray. He was stressed, He knew what was before him, and He prayed HARD. Jesus asked to not have to go through the crucifixion and to be spared the torture that was coming. Then, He said that whatever the Lord willed, He would obey.

Then, I normally focus on what Jesus said to Peter and his disciples. “Couldn’t you men keep watch with me for one hour?”  I hear His frustration in that statement. Jesus is going to be crucified soon, and the men who He had spent the most time with couldn’t stay awake for one hour.

But, this morning, it was the very last part of the verses that hit me the hardest. It is a warning from Jesus to the disciples, but it also applies to me and you.

“Watch and pray so that you will not fall into temptation. The spirit is willing, but the flesh is weak.”

The spirit is willing, but the flesh is weak! Yes, yes, and yes. Jesus is talking to me, even now as I am typing because this is a constant battle for me. I am willing, Lord, I am so willing!!! But, I am weak.

This is a very small example of how I was weak. When I was in Tennessee at my Mom’s over the summer, my daughter brought up a show called Designated Survivor. It was a series on ABC about the designated survivor in the government. A bomb killed the entire government staff during a Presidential speech, and the designated survivor became President of the US with no idea of what of how to run the government. The first two seasons were on ABC, but in the third season, it moved to Netflix and became one of their shows.

I binge-watched the first two seasons, and I was hooked. I loved the whole idea, and I wanted to see how everything played out. So, I was thrilled when they announced that season three was now live. I was still finishing up with the second season, so by the time that I finished with season two, the entire season three was already ready for me to watch.

I immediately noticed a HUGE difference between the two seasons. There was soooo much cussing and the subject matter was not what prime time television would air. I was uncomfortable…but I still watched. I complained…but I still watched. I was willing to quit watching…but I was weak. I wanted to see what happened, and so I watched.

I was almost relieved when season three ended and I didn’t have any more episodes to watch. I saw that season four is now available, but thankfully enough time has lapsed where I am no longer tempted.

Temptation comes at us from a lot of different sources. It can be innocent sources, such as watching a television show or a movie, but it is still temptation in some form.

I am so thankful that the Lord gave us instructions on how to avoid this pitfall. Watch and pray so that you will not fall into temptation. Be vigilant, be watchful, and pray when you slip up.

13 No temptation has overtaken you except what is common to mankind. And God is faithful; he will not let you be tempted beyond what you can bear. But when you are tempted, he will also provide a way out so that you can endure it.

The Lord knows that we will be tempted, but these verses should give you some comfort.

13 When tempted, no one should say, “God is tempting me.” For God cannot be tempted by evil, nor does he tempt anyone; 14 but each person is tempted when they are dragged away by their own evil desire and enticed. 15 Then, after desire has conceived, it gives birth to sin; and sin, when it is full-grown, gives birth to death. 16 Don’t be deceived, my dear brothers and sisters. 17 Every good and perfect gift is from above, coming down from the Father of the heavenly lights, who does not change like shifting shadows. 18 He chose to give us birth through the word of truth, that we might be a kind of firstfruits of all he created.

No one is immune to temptations. Not Eve or Adam, not David, and especially not Job whose wife begged him to curse God. We will all have temptations, but like Job, we can choose to listen to Jesus and praise His wonderful name!

Have A Blessed Day!!!

A GIFT GUIDE FOR THE MAN IN YOUR LIFE 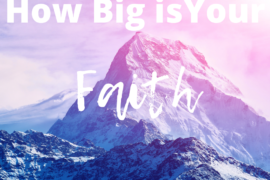