FEELING THE NEED TO GIVE - 50 IS NOT OLD

Last month, I felt the need to give back. I wasn’t sure what, or how, that was going to transpire, but the desire to give to someone was placed on my heart. I have felt those tugs only a few times in my life. I know that we have all seen the commercials on television about giving to children overseas or about how we can donate to save animals or even the ocean. Then, we also hear how those major charities have huge payrolls, and that only a small percentage of the donations reach the ones we were hoping to help. Plus, we all see so many scams now, either online or in-person, that we have become somewhat jaded to the plights of others. That was my issue when I kept looking for a way to help someone. I wanted to make sure that I was helping someone who was in need. I wanted to help someone in my community. But, I didn’t know how even to find someone in need, and I know that a lot of the times, we don’t know what is going on behind closed doors. But, the Lord sees all, and I believe that He orchestrated this entire thing months ago.

I went to the bank and post office this past week for work. I don’t work all of the time, and most of the time, my son is the one who is in charge of those duties. But, that day, I was the one who did the errands. On the way back from the post office, I pulled into a store to run in and look around. I haven’t been to that store in months, and I had nothing that I wanted to purchase, but my car still pulled off the road, and I went inside. I found a couple of journals for a great price that I bought, and I also was looking at some mints when a lady from church popped her head around the corner and said hello. She goes to a different service than I do, so I hadn’t seen her in a while. It took me a minute to recognize her because she looked thinner than I remembered. We spoke for just a few minutes, and then she left. She seemed to be in a hurry, so I went back to looking at my mints, etc.

I never thought another thing about the encounter, and later that night, she messaged and said that she was sorry for having to run off so quickly, but she needed to get back to the house. I mentioned to her that I noticed she was in a hurry, and then I also mentioned that she looked skinny. She said that the doctors think it is because of stress. And that was the end of the conversation. She seemed to assume that I knew why she was stressed, but I had no idea. A couple of days later, she messaged again, and this time, I understood. She explained that her husband had been badly hurt and that they were struggling. The doctors said that he will not be able to return to work and that he was going to require a couple more surgeries. She said that it had been placed on her heart to share this with me, and she had no idea if I wanted to help her or not, but that her daughter had set up an account if I felt the need.

The desire to help someone was placed on my heart before her husband was even hurt. I should never have run into her at that store since there was no reason for me to stop and go inside. Would I have been as willing to help her if she had sent me the same message several months ago? The truth is that I probably would have been more guarded, more jaded. I might have felt like I was being taken advantage of and ignored the message. Do you think that the Lord knew that?

27 Do not withhold good from those to whom it is due, when it is in your power to act.

I never meant for my friend to know that I sent her money, I would have liked to have remained anonymous. Unfortunately, the account was set up through PayPal, and I couldn’t find a way around my name showing. I don’t need thanks. I know that I fall short and could do so much more for those in need. I didn’t write this for me to get a pat on the back. This is about the LORD, and how we should all be thankful for His blessings. He was looking out for my friend. His love is eternal!

Look around today, and see if the Lord is placing someone in your path. Maybe there is someone that needs your blessings, whether it is monetary or just someone to talk to, you might be the answer to their prayers. 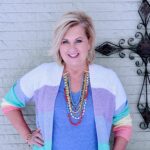 WHY I AM NOT WEARING JEANS AND SWEATS TODAY

LEARNING TO STOP AND SMELL THE ROSES

WHAT TO WEAR WHEN YOU DON’T NEED TO DRESS UP